Five Years on the Cliff

The 2014 field season marks the 5th year of the Cliff Mine Archaeology Project. The anniversary provides an opportunity for a brief assessment of what we’ve accomplished in our studies of this significant historical site, as I start to post the field team’s new blog posts about the current work.

The project began during the 2009-2010 academic year, when one of our MS students was mulling over thesis projects. With the economic fallout of the Great Recession having turned off support for all the other research projects with which we’d been involved, Sean Gohman was asking himself something to the effect of, “Since there isn’t anything pushing us toward one project or another, if I could pick any place in the Copper Country to study, where would it be?” The Cliff had captured his attention, as it had so many others, and so the research project was born. 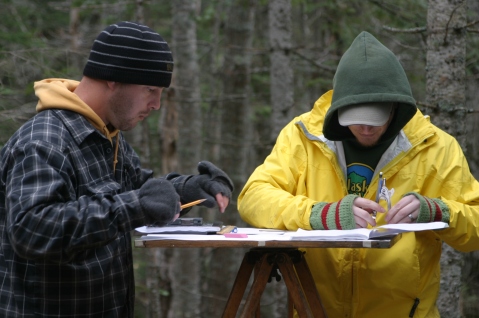 Plotting measurements and drawing a map in the Clifton Hillside Cemetery, 2014

Since that first summer in 2010, Samuel Sweitz, Pat Martin, and I have spent five years with our faculty colleagues cultivating student collaborators as they studied the site. Sean Gohman and Lee Presley have been essential in these research teams, who have mapped the site; assessed the potential for research in different areas of Cliff and Clifton; made incremental additions of new information about the Cliff; and examined the importance of the site to local community groups, people whose family histories intertwined with the Cliff, and other stakeholders around the country. We have a loyal following on the web, with more than 60 loyal blog readers and more than 50,000 hits.

The wheels of academic research turn very slowly, particularly in such a collaborative and time-intensive field as archaeology. Our research team has published two MS thesis so far (linked below) with at least one other MS thesis and two PhD dissertations in progress. Dissertations in particular are investments that can take some years to mature! Two undergraduate students have undertaken senior theses on the Cliff (ceramic analysis and zooarchaeological studies) and several more undergrads have participated in spin-off research in the archaeology lab, working on class projects related to the conservation of iron, leather, and textile artifacts; archaeobotanical examination of seeds and charcoal; dating and cross-mending ceramics, and so on. Some of those studies are going to appear on this blog. Those undergraduate papers cannot always be posted online, however, because like all student projects, their final papers are the intellectual property of each author. 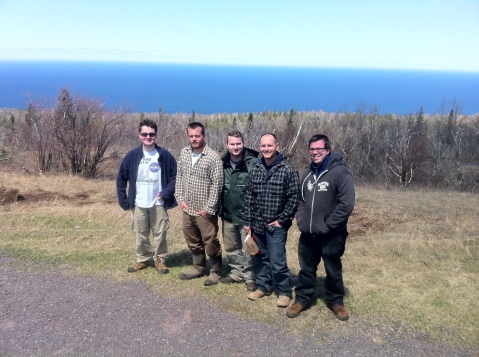 Half of the 2014 Field Team atop Brockway Mountain, during their orientation to Keweenaw Geology.

This summer, we didn’t expect to be working at the Cliff for more than two weeks. As so often happens, events transpired which led us to develop new plans. We have been at Cliff for all of this summer’s field school and the students have prepared a set of interesting reports for you on this blog about our work: mapping and inventory of the cemeteries, a soil chemistry survey in Clifton, and mapping at the North American mine site!

As Sean demonstrated in his last post, our GIS now includes a nearly complete map of the Cliff, Clifton, South Cliff, and outlines of the North American mine site, which Mr. Gohman has labored to harmonize. The mapping detail will now allow student teams to experiment with ROV “drone” mounted aerial LiDAR and multispectral imaging technologies, under guidance from MTU faculty like Yushin Ahn, Thomas Oommen, and Timothy Havens. These experiments will help us see more things on (and under) the landscape that are not visible to the naked eye while simultaneously helping our colleagues “play test” their hardware and analytical algorithms. We are also bringing more environmental archaeology into the mix, combining the history of technology and social history with an eye to landscape history and environmental processes. All these exciting things are on the horizon and are largely enabled by gifts to the Michigan Tech Fund for the Cliff Mine project (which you can do by clicking here, if you wish!)

Over the next few months, I will post those that I can. I am also excited to begin pulling the papers together into an edited book during my expected sabbatical in 2015-2016.  Stay tuned for more updates from the 2014 season, and some older updates from 2013 that I was not able to post at the time.

Sean Gohman (2010) A more favorable combination of circumstances could hardly have been desired : a bottom to top examination of the Pittsburgh and Boston Mining Company’s Cliff Mine

2 responses to “Five Years on the Cliff”